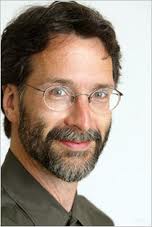 Yesterday I published a review of Mink River by Brian Doyle. Today I am happy to present a Q and A with the author, who has also written several other works of fiction and nonfiction, regularly has his essays published by magazines such as The Sun, The Atlantic Monthly and Harper’s and is editor of Portland Magazine at the University of Portland. Visit Doyle’s page at Amazon.com or the Oregon State University Press for more information about his work.

The small coastal town where Mink River takes place really comes to life through its characters. Without living in a small town yourself, how did you capture the essence of one?

BD: O, I think everyone lives in a small town. No one lives in a city – everyone lives in little villages, little eight-block communities. We gather in small villages where you know who to trust and who’s a little off and whose kid and dog that is and who you should check on if you have not seen her for a while. A lot of the book is ‘townness’ and I think that’s part of the reason people like it – because they know that town. It’s their town, sort of.

Mink River is told through the eyes of many characters. Why did you choose to tell it that way instead of through one or two main characters?

BD: Fun; couldn’t help myself; I write in little bursts; there are many many ways to tell stories; no one owns a story and I might as well write in lots of voices; I wanted the stories to braid and weave and tumble and stitch….

What difficulties did you find in weaving the stories of each character together?

BD: I had to learn pacing and timing and rhythm – you cannot leave a character on her own too long or who knows what will happen – and you cannot get fixated on one or the others will complain vociferously.

Many of the people in the town of Neawanaka are known by their names. But some, like the old nun, the man in the brown coat, and the man who beats his son are known only by their descriptors. Why did you decide to leave them nameless?

BD: Names are only labels and pigeonholing devices. We all have many names. Sometimes I think names are limiting and a little fascist – they are only sounds we use to indicate a being far too complex for any one sound or idea or statement to encompass, eh? I wanted to play with this. Think of the name “God,” for example – worst nickname ever, as David Duncan says. We think we have a sense of what that nickname covers, but that’s silly.

You bring out elements of Native American folklore and Irish storytelling traditions. Do you see similarities between the two? What role do you think they play in today’s society?

BD: O sure – American Indians (my friends who are Indians, by the way, think the phrase ‘Native American” is hilarious, we are all native Americans, they prefer their tribal affiliation or just American Indians, another silly name but at least an older one),Irish, Americans, these are all very oral storyaddled storynut cultures, devoted to saga and myth and tall tale and stories as food, signposts, pillars of life. I think stories are prayers and food. I worry that our cultural addiction to flickering easily accessed image, for which you need do nothing but stare vapidly, saps our skills at storycatching and storysharing, which require participation, reading, listening, talking. If we do not share stories of substance and grace, we will be inundated by marketing and empty stories.

What kind of research did you do before telling the story in Mink River?

BD: A lot of botany and Salish cultural history. The Gaelic and the natural history and the Irish history are all interests of mine.

Why did you give a personality and voice to Moses, the crow?

BD: He did himself. I just typed what he said. He was a happy accident – he just started speaking in one scene and I have learned the great lesson as a writer of letting things happen – when you try to control characters, they lose life.

Often you show the people in the story experiencing similar things at the same time while in different places. Do you believe that is often the case in real life as well?

BD: O heavens yes. We just don’t acknowledge it. Sure it happens. Who’s to say it doesn’t? I am asked a great deal about ‘magic realism’ in the book, the talking crow, the bears’ language, the river speaking for itself, and I suppose I think, who knows? What if? Why not? Are you so sure about reality and what’s possible? I am sure not sure at all one bit.

Is there anything you would like to say to readers at Mother Daughter Book Club.com on the value of parents reading the same books as their children?

BD: O man the shared time, the shared voices, the shared adventure – isn’t that all a language of love? And they will be so soon gone, so soon launched – what could be cooler than swimming in story together?